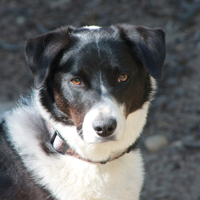 Maya, a five-year-old Border Collie (pictured), presented symptoms of lethargy and occasional vomiting and diarrhea. She was a dog who loved doing agility trials, but who had become much slower in her performance. Her blood profile was normal, but a very astute doctor kept investigating, and when "Maya" flatlined her ACTH stim test, a diagnosis of Addison's was made.

Talk to your veterinarian if you notice any changes in your pet's behavior or see symptoms of lethargy or vomiting.

Addison’s disease is an endocrine disorder where the adrenal glands, near the kidneys, fail to produce enough hormones.  This disease is relatively uncommon (approximately one case per 3000 dogs) but it is more common in dogs than humans. It is very rare in cats.

The common symptoms of Addison’s are lethargy, occasional vomiting or diarrhea, weakness, low body temperature, low heart rate, and shaking. The symptoms are often vague, may be intermittent, and can be attributed to many other causes. The problem is probably under-diagnosed; the doctor must have a high degree of clinical suspicion. The disease can be fatal if left untreated.

Addison’s usually affects young to middle-aged dogs, but can occur in any age. About seventy percent of cases are female.  Some breeds are more likely to be affected: Great Danes,  Newfoundlands, Portuguese Waterdogs, Rottweilers, German Shepherds, Westies, Wheaten Terriers, Springer Spaniels, but the breeds with the highest rates are Standard Poodles, Leonbergers, and Nova Scotia Duck Tolling Retrievers.

A regular blood profile may have changes that suggest Addison’s, especially certain alterations in the electrolytes.  The specific test for the disease is an ACTH stimulation blood test. This test involves two blood draws, one before, and one an hour after an injection of a drug named Cortrosyn. Both of these samples are sent to the reference lab, and the results are compared to one another. A normal animal will respond to the Cortrosyn by a big increase compared to the first sample. An Addisonian animal will not have an increase.

Treatment is either with an oral daily drug, Florinef, or an injectable drug, Percorten, that is given every 25 days. Most veterinarians use Percorten now as it provides better, smoother control of the disease, and does not rely on owner memory and compliance every day.  A version of the disease called atypical Addison’s may need only oral prednisone. Talk to your veterinarian if you have any concerns about your pet’s health.

For Boarding questions, please email us, Please DO NOT use the scheduler for inquiries. The scheduler is intended only for securing boarding reservations. We do not receive a notification when you have questions or communications pending.

Tri City Veterinary Clinic maintains an active presence on many popular social media websites. Select your favorite website below to stay connected with us.

Complete the form below to send us an email.